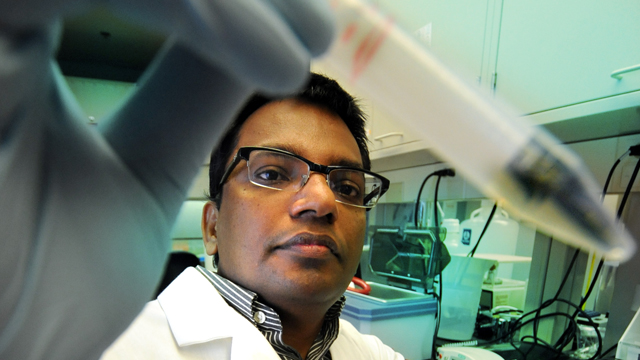 Above: Dr. Anilkumar Pillai, MCG neuroscientist, published a study in Molecular Austim about the impact of estrogen on autism.

In the first look at a potential role of the female sex hormone in autism, researchers at the Medical College of Georgia at Georgia Regents University have found expression of estrogen receptor beta – which enables estrogen’s potent brain protection – is significantly decreased in autistic brains. The receptor also plays a role in locomotion as well as behavior, including anxiety, depression, memory, and learning.

“If you ask any psychiatrist seeing patients with autistic behavior their most striking observation from the clinic, they will say there are more males compared to females,” said Dr. Anilkumar Pillai, MCG neuroscientist and corresponding author of the study in Molecular Autism.

Estrogen is known to help protect premenopausal women from maladies such as stroke and impaired cognition. Exposure to high levels of the male hormone testosterone during early development has been linked to autism, which is five times more common in males than females.

The new findings that reduced expression of estrogen receptor beta as well as that of an enzyme that converts testosterone to estrogen could help explain the high testosterone levels in autistic individuals and higher autism rates in males, Pillai said.

It was the 5-to-1 male-to-female ratio along with the testosterone hypothesis that led Pillai and his colleagues to pursue whether estrogen might help explain the significant gender disparity and possibly point toward a new treatment.

“The testosterone hypothesis is already there, but nobody had investigated whether it had anything to do with the female hormone in the brain,” Pillai said. “Estrogen is known to be neuroprotective, but nobody has looked at whether its function is impaired in the brain of individuals with autism. We found that the children with autism didn’t have sufficient estrogen receptor beta expression to mediate the protective benefits of estrogen.”

Comparing the brains of children with and without autism spectrum disorder, the researchers found a 35 percent decrease in estrogen receptor beta expression as well as a 38 percent reduction in the amount of aromatase, the enzyme that converts testosterone to estrogen.

The study focused on the brain’s prefrontal cortex, which is involved in social behavior and cognition. Brain tissue from both autistic and healthy subjects was obtained from the Eunice Kennedy Shriver National Institute of Child Health and Human Development Brain and Tissue Bank for Developmental Disorders at the University of Maryland. The children died at an average age of 11 from drowning, other accidents, or suicide. All the brain tissue was from male children except for one control.

While much work remains, estrogen receptor beta agonists, which are already known to improve brain plasticity and memory in animals, might one day help reverse autism’s behavioral deficits, such as reclusiveness and repetitive behavior, Pillai said.

Studies published in the journal Molecular Psychiatry earlier this year by scientists at the University of Cambridge and Denmark’s Statens Serum Institute showed that male children who develop autism were exposed to higher levels of steroid hormones, including testosterone and progesterone, during development than their healthy peers.

The incidence of autism has increased about 30 percent in the past two years in the United States, to the current rate of about 1 in 68 children, according to the Centers for Disease Control and Prevention. Most children are diagnosed at about age 4, although the disorder can be diagnosed by about age 2, according to the CDC. Diagnosis is made through extensive behavioral and psychological testing.